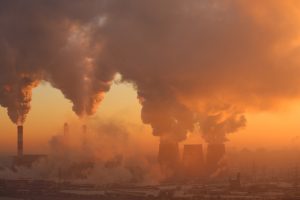 This piece first appeared on Bloomberg View and can be accessed here.

The past few days have not been good for the fossil fuel industry. First the Pope admonished oil majors for not doing enough to tackle climate change, warning them there was “no time to lose” to address the “challenge of epochal proportions”. Next, Legal & General, Europe’s second largest asset manager, called on the sector to recognise that it was in decline and pledged to vote against companies that were falling behind on action to tackle climate change.

This week, the European Union tightened its binding target for renewable energy from 27% to 32% by 2030, with provisions for further tightening.

A less widely reported, but highly consequential development was the action filed at the European General Court, the EU’s second highest court by a group of ten families. All claim to have suffered loss from climate change and sued the EU claiming that greenhouse gas (GHG) emissions from its territory have violated their fundamental rights to health, occupation, property and equal treatment.

The plaintiffs are asking for the EU to tighten its GHG reduction targets by building on the successful Urgenda case, where courts obliged the Dutch government to act more forcefully to fight climate change. The government has appealed, but the case has already inspired copycat suits the world over. Another family of lawsuits takes the shape of fossil fuel majors being sued for public nuisance, failure to warn, negligence and trespass. They are being pursued by cities including New York and San Francisco in the US, and allege that these companies continued to produce and market fossil fuels while knowingly concealing climate risks. Both kinds of suits, if successful, will squeeze fossil fuel majors through reducing demand and increasing costs.

However, even if most of the more than 1000 climate lawsuits outstanding in 28 national and 7 international jurisdictions fail, they will do serious damage to the fossil fuel industry. They contribute to raising awareness that neither governments nor fossil fuel majors are doing enough to address climate change, which pressures them into action. They also make investors and regulators more aware of the risks to fossil fuel firms from both stricter policies and the potential award of damages. The process of “discovery”, already underway in a number of the suits, is likely to bring a lot of new, potentially damaging information to light, further tilting the scales of public opinion, risk perception and future legal liability against the fossil fuel majors.

Every little victory sets an important precedent, which future lawsuits can build on. Many of the earliest lawsuits against Big Tobacco also failed, but they were critical in helping to establish precedents on scientific consensus, on the harm being caused and on the duplicity of tobacco companies that had actively supressed research thus misleading the public on the harmful effects of smoking.

While successes have been few thus far, legal experts agree that the attitudes of judges shift with the times. An international panel of senior judges admitted that judges are influenced by the zeitgeist of growing worries and mounting evidence about climate change, so are more likely to look more favourably at climate liability lawsuits. It concluded that, in fact, many companies may already be in violation of existing laws on climate change.

Oil majors are finally starting to acknowledge the rising risk. In a recent filing with the Securities and Exchange Commission Chevron admitted that such risks could have a “material adverse effect on the company”, “curtail profitability” and even render the business model of Carbon Majors such as itself “economically infeasible”. In a rather bizarre exchange with shareholders, BP’s CEO Bob Dudley refused to disclose certain climate targets, or even answer some questions from activist investors, citing a very real threat from class-action lawsuits in the US.

As we show in a forthcoming Re-Define report, “Target on their backs”, the number of developments mean that risks from climate lawsuits for fossil fuel firms are likely to increase sharply, and may soon start crystallising into costs.

First, the number of national and international statutes pertaining to climate change continues to rise, with 106 new laws already having been passed since the Paris Agreement, including 28 that explicitly reference it. Adding in existing laws and executive polices takes that to 2000. The more laws there are, the more lawsuits and legal routes to remedy to expect.

Second, each successful lawsuit creates a precedent, which others can often build on. Even when such precedent is in other jurisdictions, it can help inspire plaintiffs in others to bring similar suits. Successful climate change lawsuits will also help change jurisprudence, even where precedent may not apply directly.

Third, the damage from climate change is accelerating, with the frequency of extreme weather events having risen fivefold in the past 30-40 years, for example. Rating agencies such as Moody’s are already starting to factor exposure to climate change in their ratings. Expect an increasing number of litigants to seek compensation.

Fourth, the science of attributing specific damage, for example, from a flood, to climate change, has improved exponentially in the past decade. Scientists are increasingly ready to serve as expert witnesses. Courts already regularly accept probabilistic arguments, such as on exposure to hazardous chemicals. Causality linking damage and harm to climate change can now be established with increasing confidence and robustness.

Fifth, advances in measurements such as the development of the Carbon Majors database means that the proportional culpability of specific listed firms, such as Exxon Mobil, can be reliably established through their share of cumulative emissions.

Given these developments, it would be dereliction of fiduciary duty by the boards of fossil fuel majors and the asset managers that own them, not to acknowledge and manage these risks. LGIM is right, the sun is slowly setting on fossil fuel majors.