Why we must cap banker bonuses 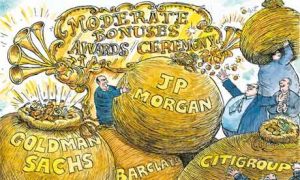 Note: This is the original longer version of an Opinion Piece arguing for imposing caps on banker bonuses that appeared in the Guardian newspaper on the 25th of Feb 2013.

The European parliament is right to limit the maximum bonus bankers can command as a proportion of base salary. This will help tackle the culture of excessive risk-taking and the bending of rules that has now become endemic to banking. Undertaking this at an EU-wide level will also limit any large-scale migration of the so-called ‘talent’. It will reduce the risks borne by tax-payers and go a long way to rehabilitate the industry, making it focus on serving the real economy again.

Whatever one might think of base salary levels in finance, it is the possibility of large bonuses that has been a major driver of many of the most pernicious problems in banking. The risk-reward landscape faced by bankers is highly skewed. Traders and deal-makers, in particular, can earn multiples of base salary on the upside. Retail banking has also seen a proliferation of performance-linked pay, where selling large volumes of products, such as payment protection insurance, is highly rewarded. The downside, if things go wrong, is limited to getting fired and losing one’s salary. Criminal prosecution and prison, no matter what the degree of malfeasance or irresponsibility, remain an exception. The costs of things going wrong are often borne by taxpayers.

These skewed incentives drive excessive risk-taking among traders, promoting marginal and sometimes “value-destroying” mergers and acquisitions by investment bankers, and the sale of inappropriate financial products by retail bankers. All else being equal, larger, riskier trades, bigger mergers and higher volumes of products sold are more profitable. As the Libor scandal, the widespread mis-selling of financial products and support for dubious tax-evading activities all show, the starry-eyed pursuit of ever-larger bonuses also drives bankers to cut corners with the law.

As a consequence, the financial system ends up being larger, more complex and has more frequent transactions than is socially optimal or financially necessary to support the real economy. Rent seeking at an individual level by bankers where they pocket the gains and can impose losses on taxpayers and the rest of society is reflected at an aggregate level by a banking system that has become parasitically rent-seeking.

Controlling bonuses for eventual losses is not enough (the so-called clawbacks), because risks will only sometimes materialize into losses, particularly if bankers load up on low probability, high impact systemic risks.  When such risks materialize, as in 2008, the whole banking system needs to be propped up or the economy faces collapse. The bending of rules at institutions also often goes undetected. In most years, bankers will be heavily rewarded for behaviour that at the outset is harmful for the whole of society.

Linking pay-outs to the risk faced by the firm will not work either, as even the largest traders will only account for a fraction of the firm’s overall risk. The sensitivity of bonuses to profit attributable to a banker remains much larger than to any increase in firm-level risk. It remains entirely rational to load up on risk, no matter if one gets paid in coco / bail-in bonds. Paying bankers in shares or options can actually be counterproductive as such packages further increase the asymmetry between the good and bad states of the world. The downside of shares or options is limited whereas the profit potential is enormous. Payment in share options has been known to get executives even more focussed on short term gains, even when it comes at the cost of long-term pains.

In fact, there are only two ways to address the heavily skewed incentive structure bankers face: by increasing downside risks faced by individuals or by limiting rewards. Since we are not about to start hanging bankers, the excessive risk taking that is endemic to the financial system can only be tackled by capping rewards.

Bonuses supposedly reward effort or ability, but are usually based on outcomes, because these are easier to measure. A reasonable case can be made for rewarding effort with profit-linked pay in the real economy. The longer a good dentist works, the more income he can generate, but there are only 24 hours in the day. In finance, the link between effort and profit is much less robust than in dentistry or manufacturing. This does not apply to finance. Bigger or riskier trades can generate much higher profits, but the link to additional effort is weak. Should activities that bend rules to generate higher profits be rewarded in proportion to these profits?

Banking is “scalable” like creative professions such as writing or acting. In these, a relatively small personal effort can generate huge profits; JK Rowling, the creator of Harry Potter, is now a billionaire.

However, there are three important distinctions between such creative professions and banking. The average author and the average actor are poor, while the average banker is not. Writers have to be exceptionally talented or exceptionally lucky to make it, bankers do not. Reading Harry Potter or watching Tom Cruise (personal taste aside) adds to the lives of millions of people (at least it does not make them miserable and you are free not to engage). Problems in Banking, on the other hand, can and do pose an existential threat to whole societies, irrespective of our individual choices.

Additional considerations of fairness only add to what is already otherwise a very sound stability case for imposing bonus caps on bankers. This would also produce subsidiary benefits of a banking system that is simpler, smaller and more ethical, support for which has snowballed since the financial crisis.

Sony Kapoor is Managing Director of the Re-Define, Chairman of the Banking Stakeholder Group of the European Banking Authority and a Senior Visiting Fellow at the London School of Economics.